This fall, Chantecaille celebrates their 15th anniversary with a small collection of soft, natural fall colours with a LE eye palette, a blusher, 2 lipsticks and 2 glosses (one of which is new, the rest are repromotes), and a liquid liner (repromote). 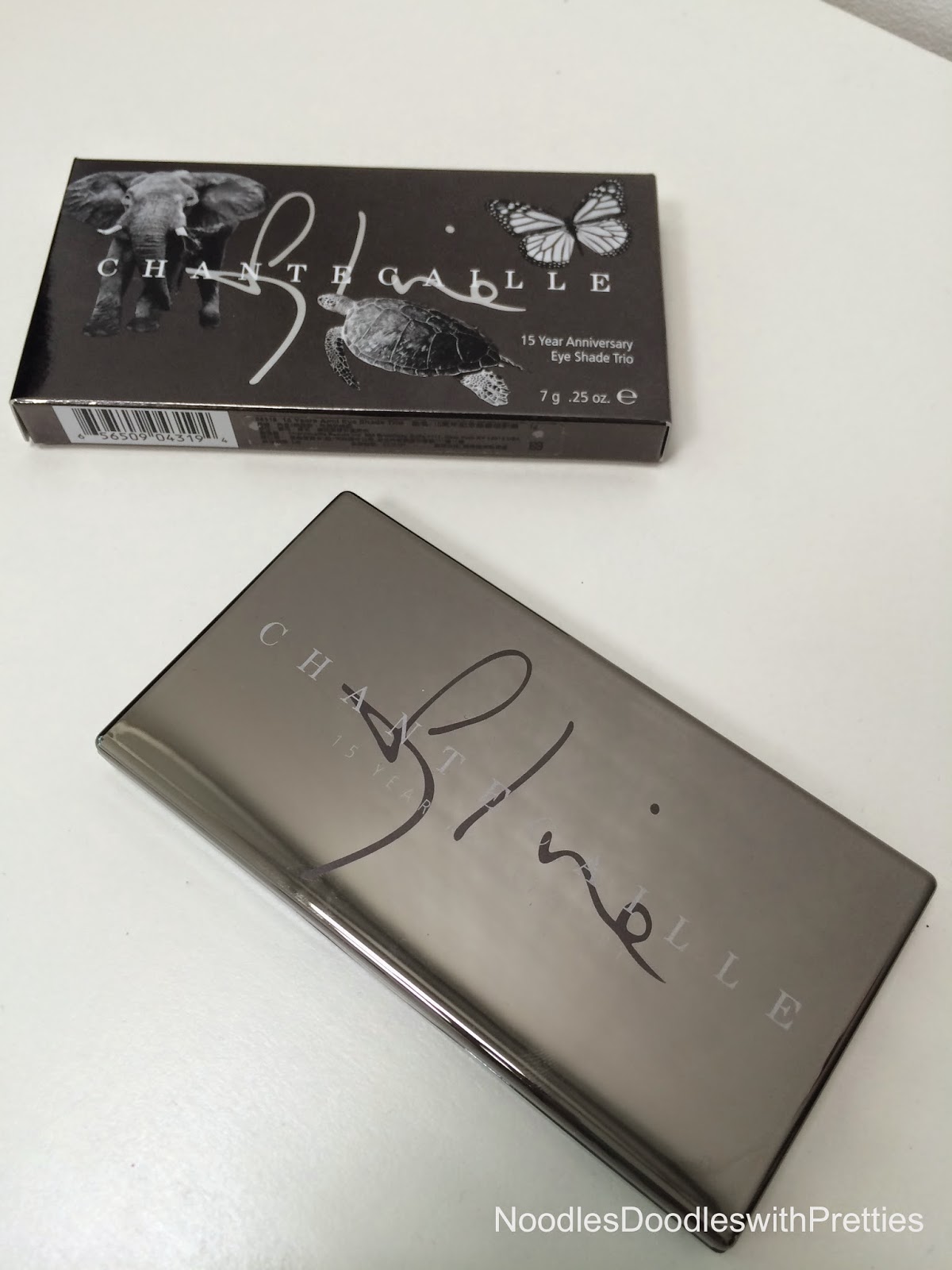 The main attraction of the collection is of course the LE 15 Year Anniversary Eye Shade Trio. The pattern on the packaging and embossed on the shadows include animals of the land, air and sea, represented by the endangered elephant, butterfly and sea turtle. In case you’re wondering, the signature on the packaging is Sylvie Chantecaille’s, the founder of the brand.

I love the meaning behind each of Chantecaille's special edition animal palettes. While I don't know how much they do generate for the various causes, it's better than nothing, and it’s such an elegant the way to generate awareness.

The shadows can be applied wet or dry. I’ve only tried it dry because I don’t want to risk turning these into a hard crisp, and I really can’t be bothered with wet eyeshadow brushes. 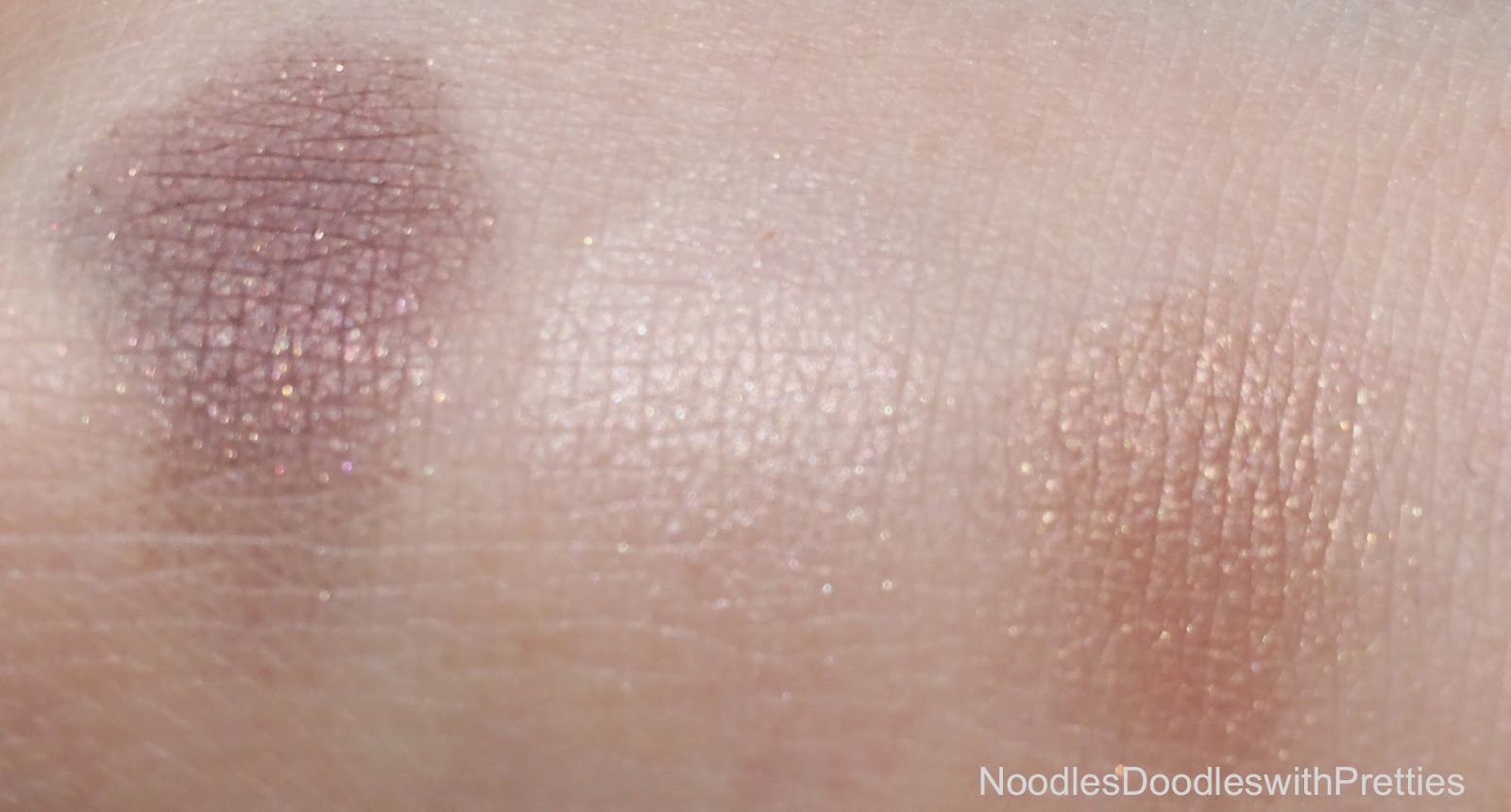 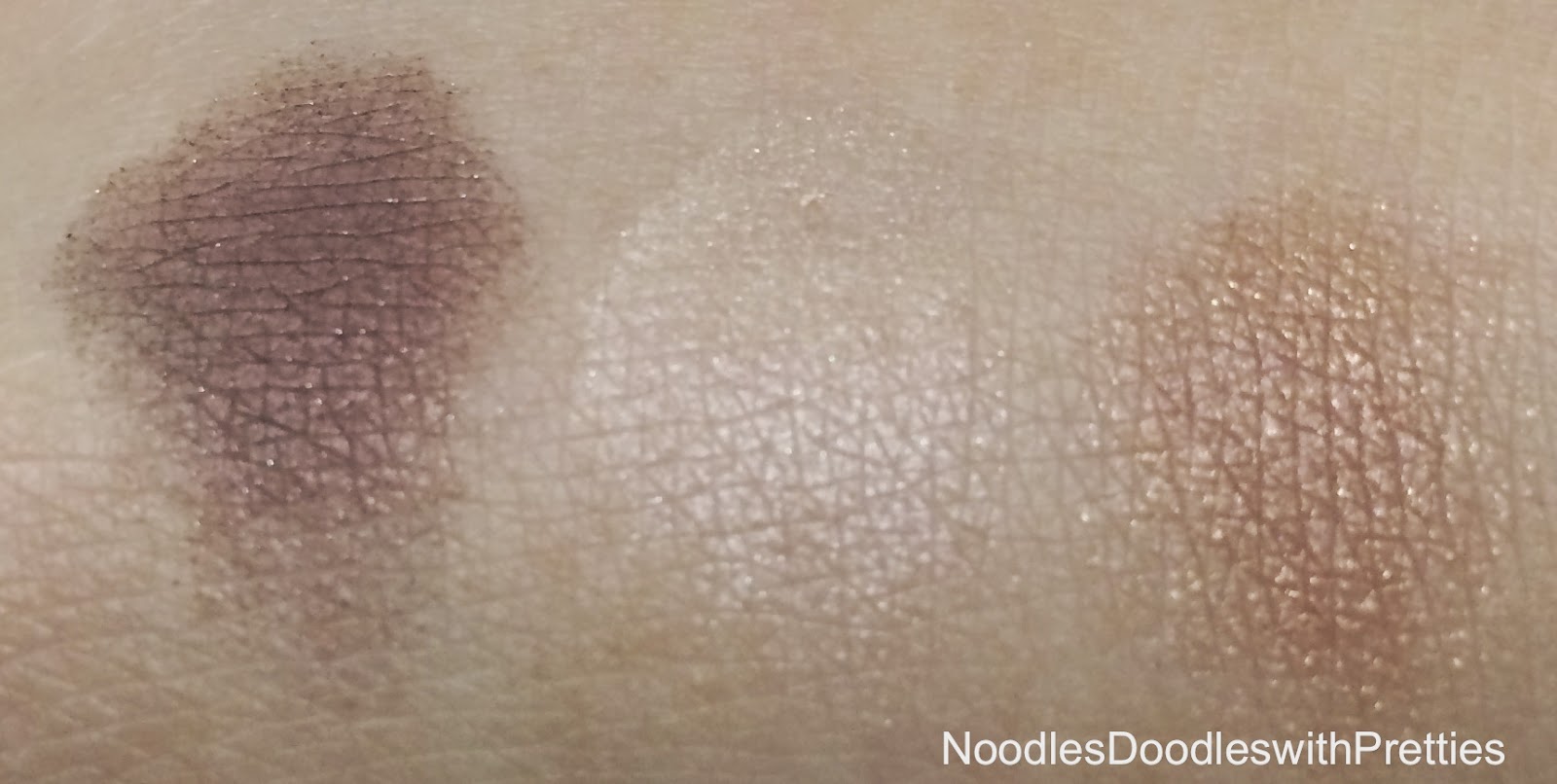 In the swatch comparisons below: a. Chantecaille / b. Cle de Peau #303 / c. Chanel Poesie 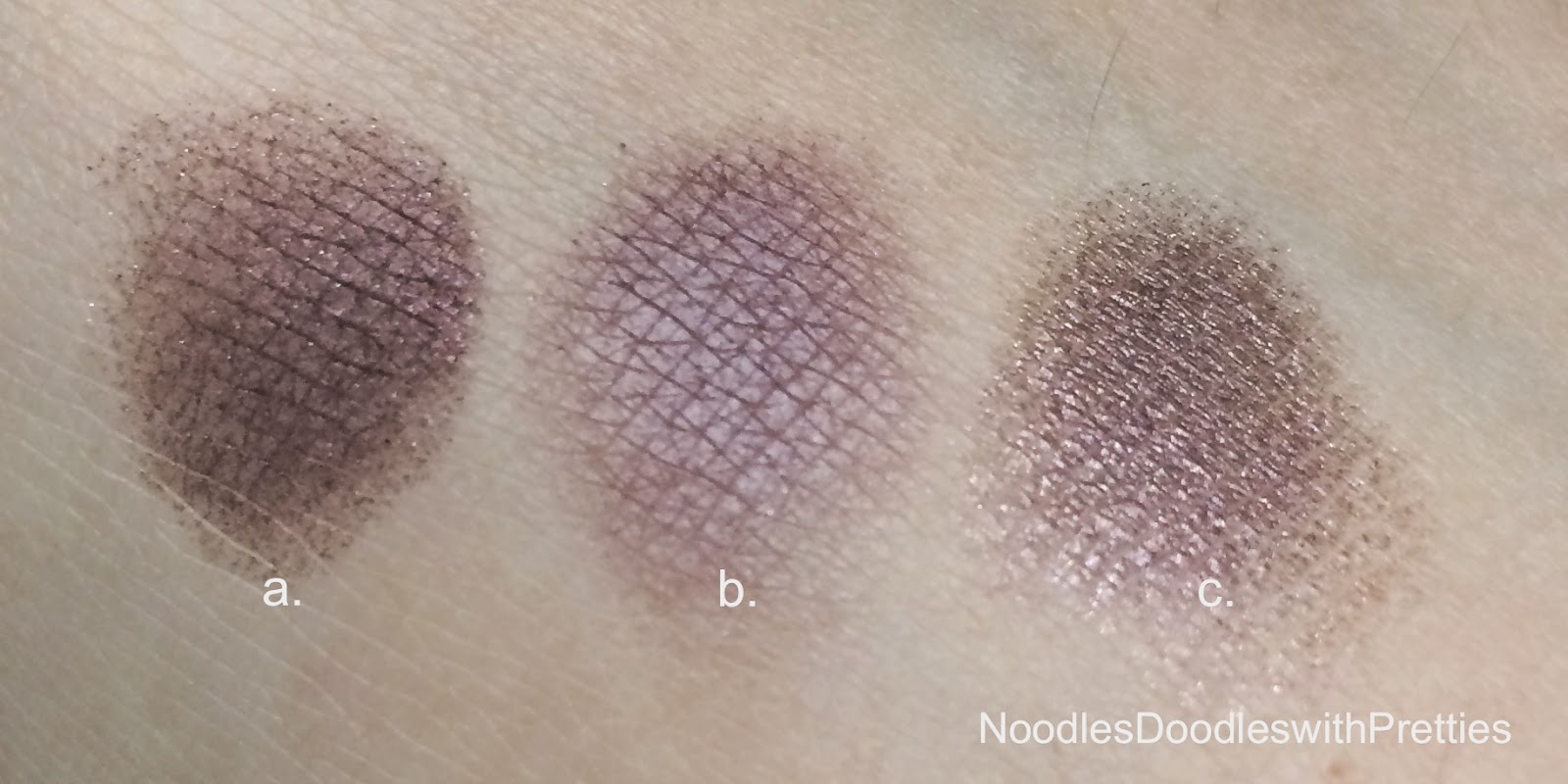 The elephant is a plummy, ‘deep, earthy aubergine’, and the actual elephant embossing has a more pronounced shimmery overspray. It’s a very flattering plummy brown shade with rose gold shimmer. Used dry, it’s pretty sheer, and even built up, it’s got a slight translucency to it that may turn off many (since this is the most pigmented shade). The shimmer is quiet and subdued, applied it looks more like a dimensional matte than a shimmer. The CdP is lighter, cooler and more fully purple, the Chanel is much more metallic.

The butterfly is a soft pink ‘warm buttery vanilla’ that at first contained this electric pink iridescent shimmer that really looks gorgeous on the lids. Sadly that was only an overspray, and the pink shimmer underneath, while more dense, is very very subtle, to the point of undetectable on the lids. A shame really, because I might have considered a backup of this trio otherwise. The CdP is more beige apricot and metallic, the Chanel is similar in colour but much more metallic. 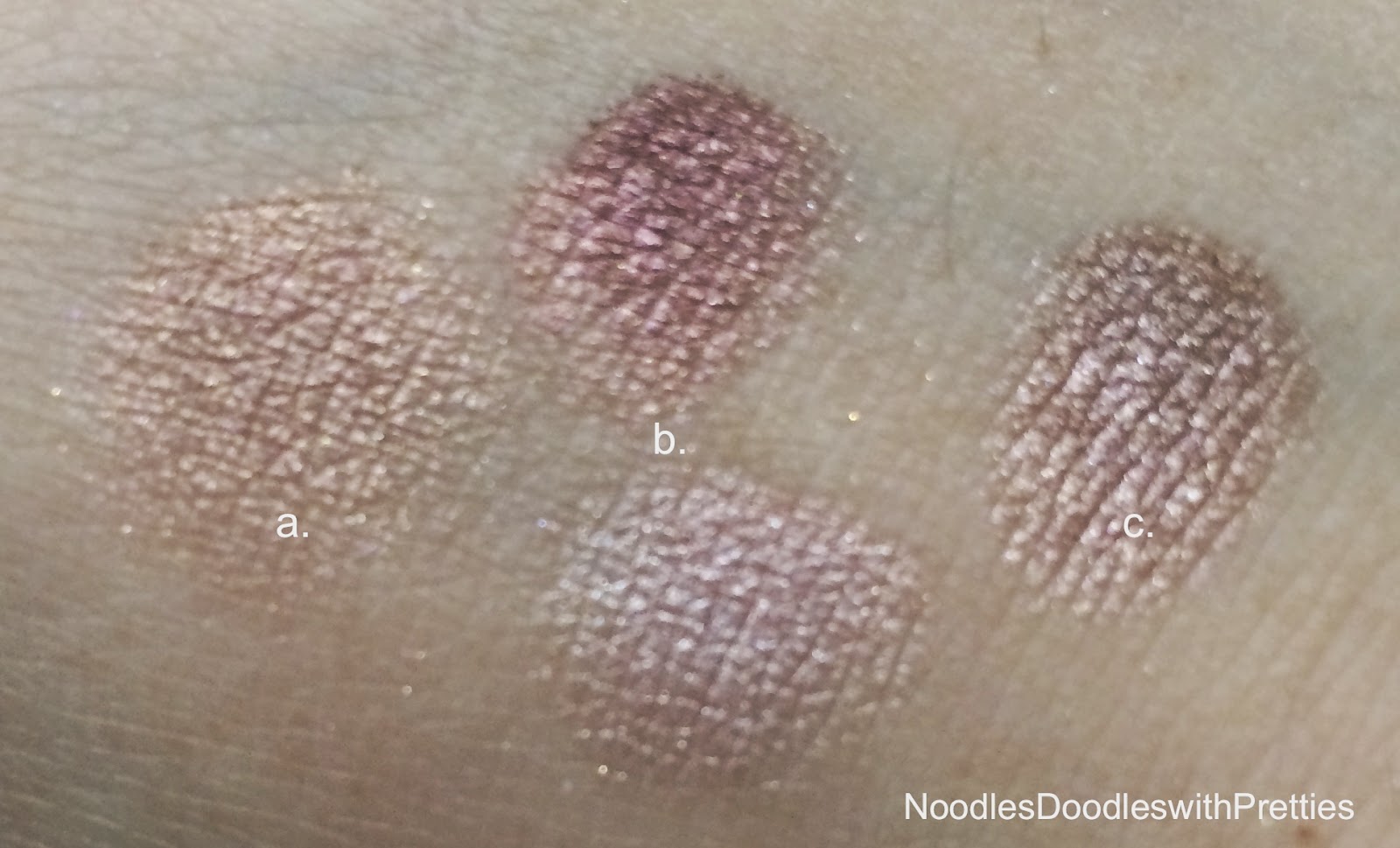 The sea turtle is a rose copper with rose gold shimmer and is very flattering for my skintone. I’ve used this shade the most, and is my favourite shade of the trio. It gives my hooded monolidded eyes this depth of dimension, and I’m convinced it makes my dark brown eyes look larger. While it is a copper, there is enough brown and tan in there that makes this a great crease colour for me too. This is the most shimmery shade of the trio, more satine than the elephant shade, but faaaar from being anywhere near bling. The CdPs are both much more purple, the Chanel is browner and has purple tones.

In my limited experience with Chantecaille shadows, I would say these are on par with the palettes released more recently (say from the last two years), and that pigmentation is on the sheerer, more translucent side. Textually, all three are very finely milled and silky soft, though not buttery soft (compared to say Armani Eyes to Kill Solos). The sea turtle shade however, is slightly less silky soft to the fingertip touch than the other two, but with application via brush, I couldn’t tell a difference. I applied without primer, and it lasts me all day (though the butterfly shade is hard to tell).

I think there will be many who will think this is much too overpriced for how sheer the palette is. I have read that many have been disappointed with the more recent palettes because of the lack of pigment compared to the older palettes, and this palette will likely disappoint those people. Also, there is a high chance most would have dupes of all three of the shades (even from within the brand I feel). 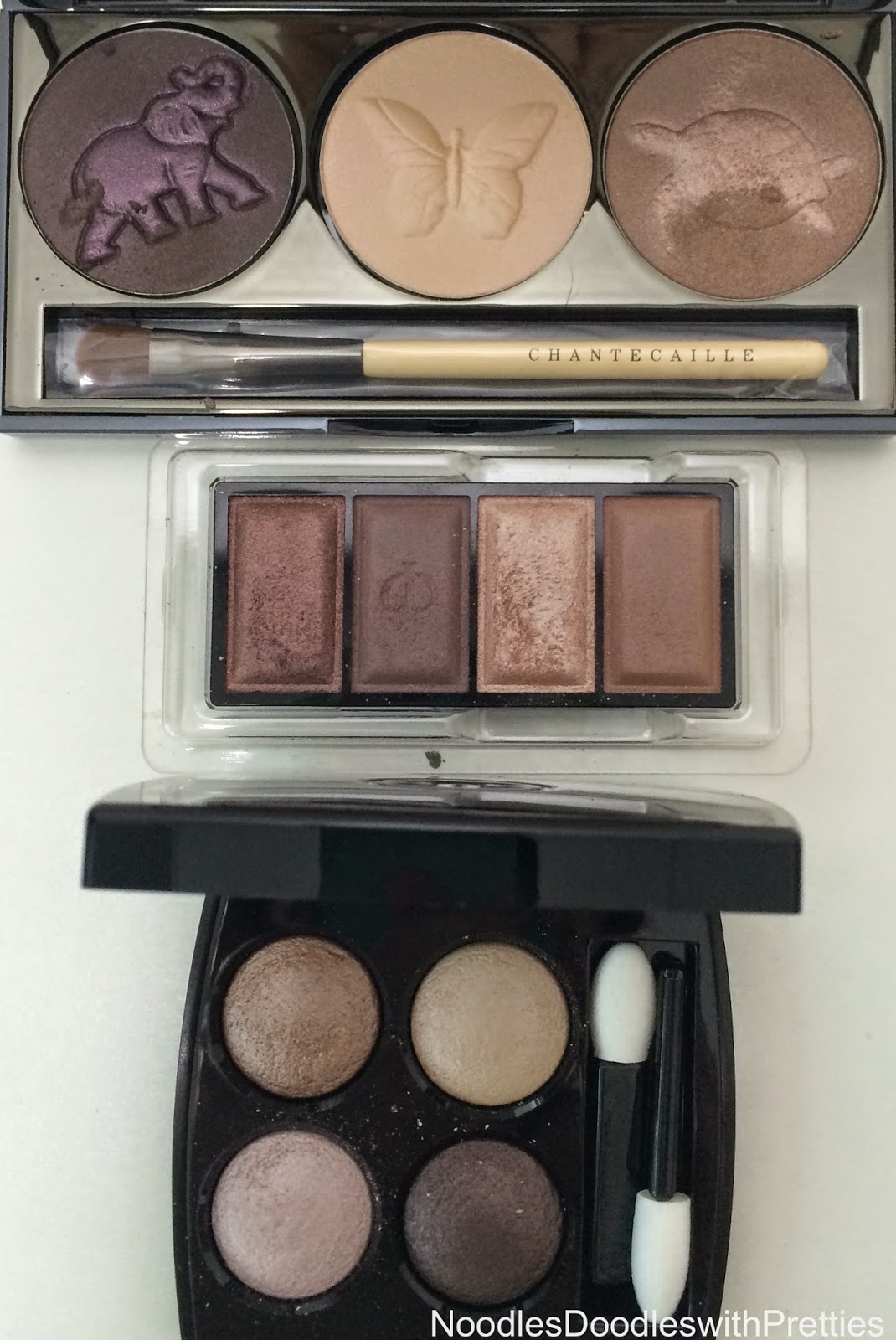 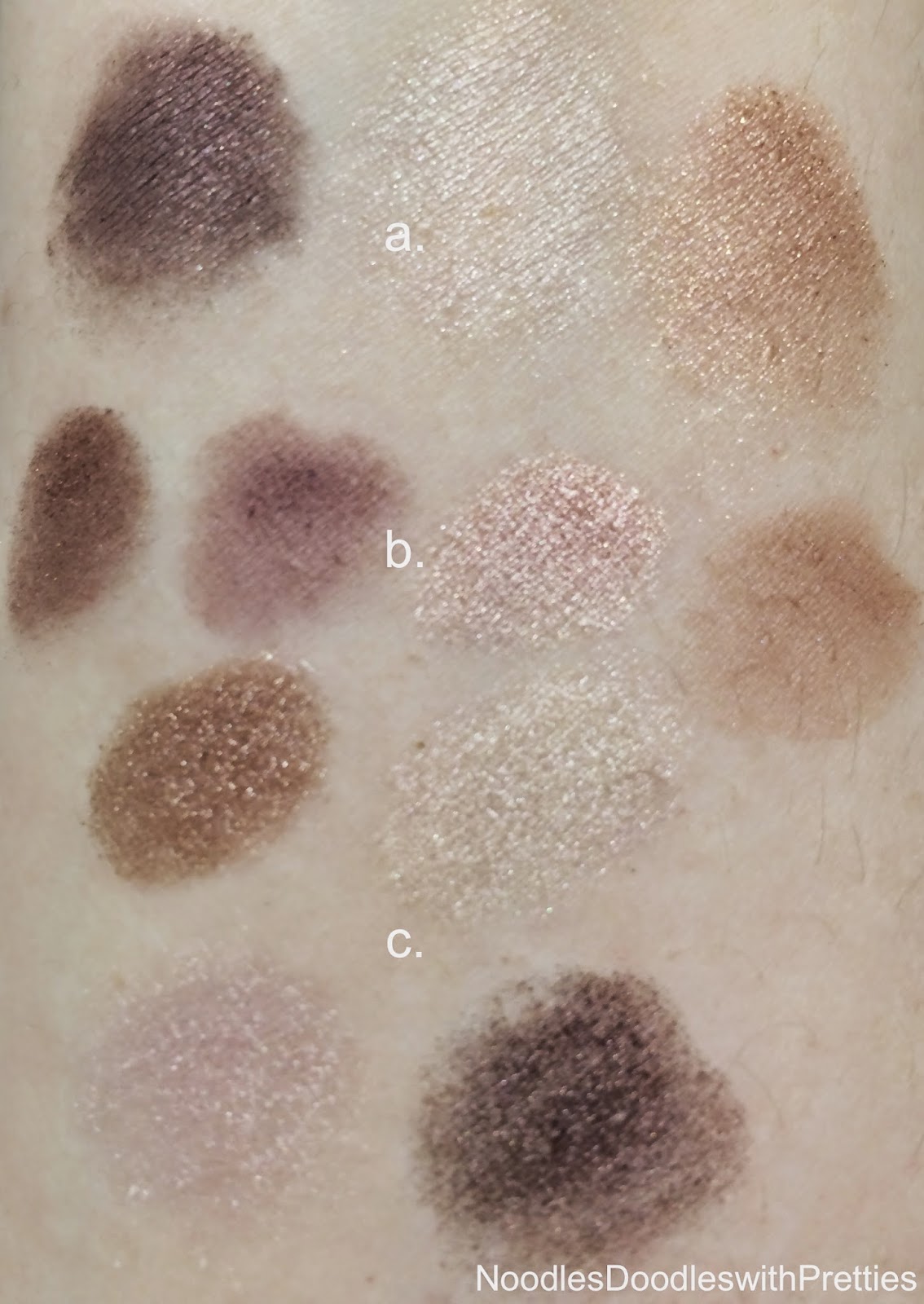 Poesie is easily the most metallic and bling-tiful. Baby Universe shares the same translucent beauty, but contains separate matte and shimmer shades.

Personally, I do really like this palette, and I’ve been reaching for it non-stop. It may not be the same level of love I give to the new Chanel or CdP quads, but I find this a very flattering and wearable glowly matte, and it feels good to have contributed to wildlife conservation in this way also. 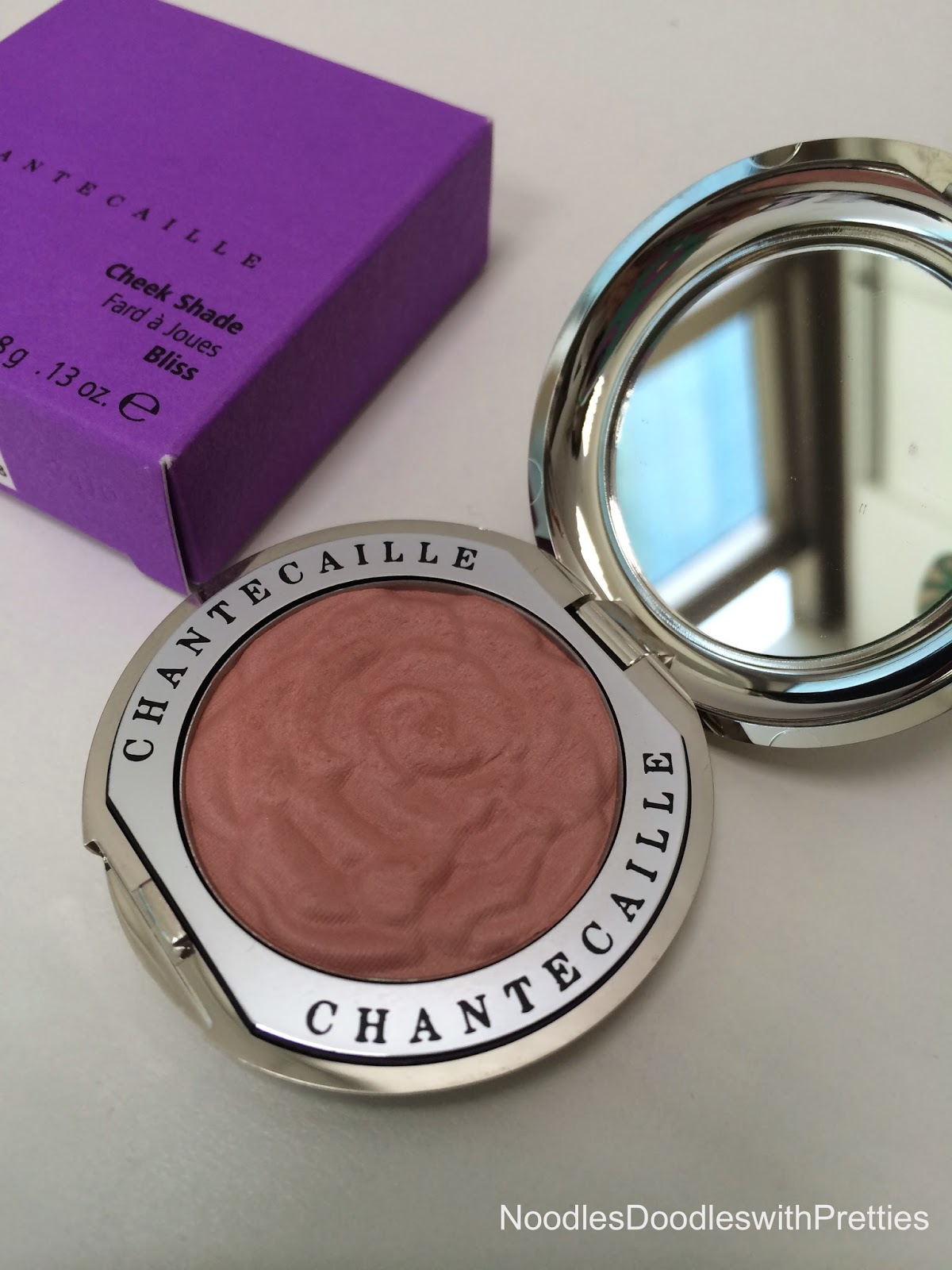 The other LE item in this collection is the Cheek Shade in Bliss. If you brought this without swatching and hoped for a soft pastel pink, you may be in for a disappointment. On the skin, I'd describe Bliss as a bronzing blusher. There's a terra-cotta to the blusher that gives it a burnt orange tinge.

The website describes the formula as giving ‘the most subtly convincing blush of color’ and I totally agree. It gives me an incredibly natural flush, that looks like I've just had a good workout. There is no shimmer that I can see, but the blush is far from matte. The light reflecting particles in there brings to my cheeks this lovely luminous glow.

It's not overly pigmented, and again there is a translucent sheerness to it, but it's easily buildable. I'm not familiar with Chantecaille's powder blushers (I have their cream ones which I love and really should do a post on) so I can't tell you how the measures up with the permanent line. The wear is great, lasting me all day, both the pigment and luminosity. 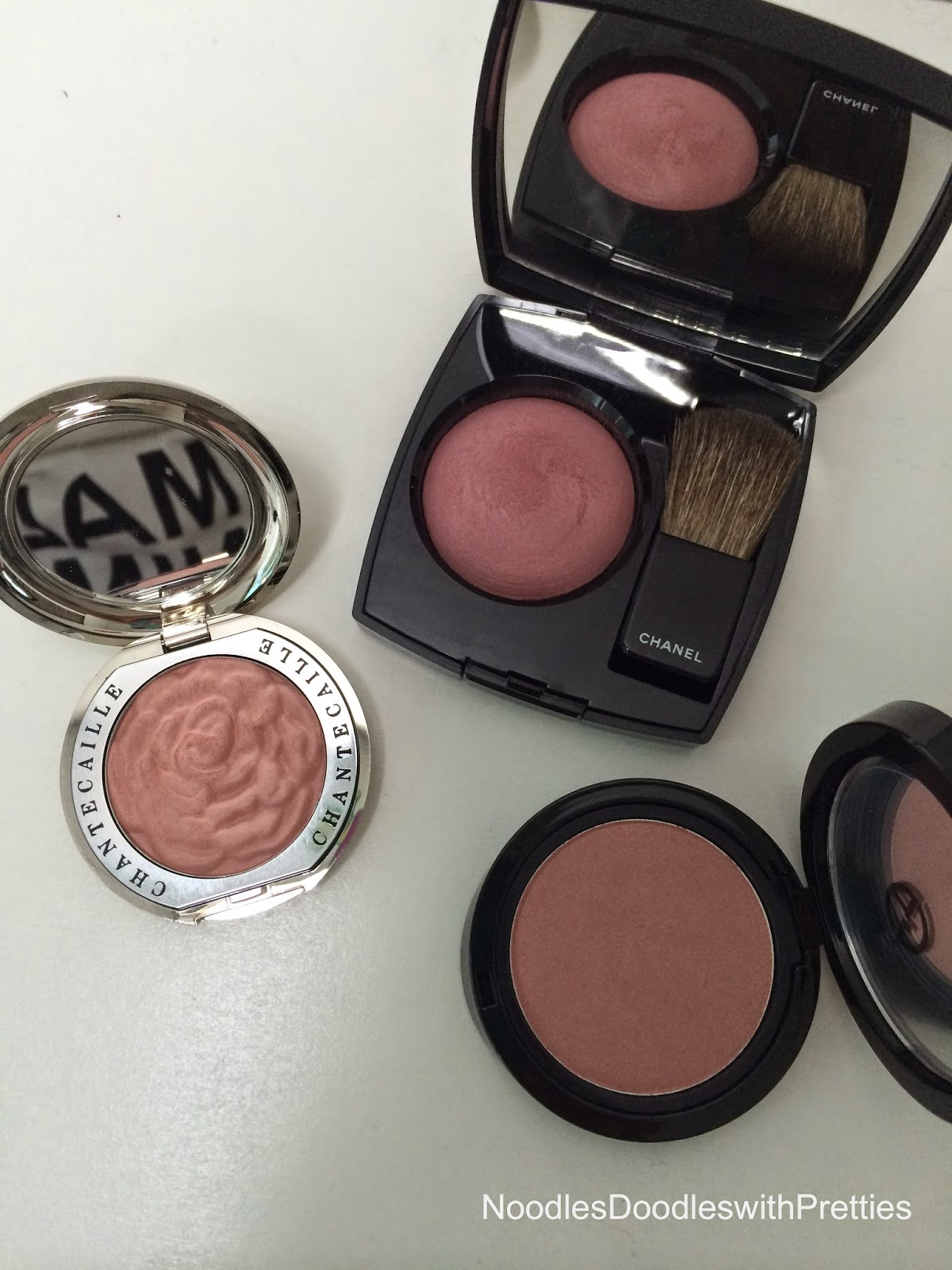 Above is a comparison of Bliss (left) with Chanel Joues Contraste in Innocence #160 (center / FOTD here) and Giorgio Armani Cheek Fabric in Daybreak #503 (right). Can you see how Bliss just molds to the skin so naturally with the dreaded swatch edge. It's in the same rose orange spirit as Daybreak, but the latter has much more visible shimmer. If I remember correctly all three blushers are LE.

I think natural translucency, glowly matte are my conclusions of the two limited edition items from Chantecaille’s 15 year anniversary collection. Both are right up my alley and I’m really enjoying using each of them.

From the collection I did also pick up two lip products, a Luminous Lip Gloss in Mulberry (an aubergine brown with gold, silver and green flecks of glitter, not merely shimmer, that can’t be felt on the lips) seen worn in the Bliss pic, and Hydra Chic Lipstick in Fairy Moss which hasn’t arrived at counter yet, so I’ll hope to do a lippy post later.

Have you picked up any of Chantecaille’s Anniversary items?

This palette and cheek blush, they both look very pretty. I don't know if I should pick one of these up since in the past I ended up not using my Chantecaille pretties all that much. I love your swatches with layering though, these make me consider the palette, again :-)

Thank you Sara! For me the palette is a very easy to wear set of colours and textures, but if you found the Chanel Poesie to be a little too safe and not unique enough, you may find this palette to be also. I do think the blusher is worth a try if you have access to a Chantecaille counter.

Hey Noodles, thanks for the swatches and comparisons! I don't think I'll hunt these down because I like pigment, but they do look fantastic on you!

Thanks Sunny!
These are def not for high pigment lovers, and since you have Poesie, the Trio is very similar in colour theme.

I love surfing and blogging. Thanks for your blogs, I have now another idea what to do on my own blogs. Keep it up. I'll come back later to read more post from you. Thank you.

I love scanning your blog and your work was very impressive I hope that you will continue to inspire people and always be happy of what your doing. Have a great day. Visit my site too. Thank you.

The subsequent time I read a blog, I hope that it doesnt disappoint me as much as this one. I imply, I know it was my choice to read, however I truly thought youd have something fascinating to say. All I hear is a bunch of whining about something that you could possibly fix if you happen to werent too busy in search of attention. gsn casino