There’s (and will continue to be it looks like) definitely been an eyeshadow new release/reformulation overload this year. So far, I’ve particularly loved Armani’s new singles and Chanel’s Tisse quads. The new YSL palettes are nice, but I personally like the Chanels better. As for singles, the new Nars' are also nice, but price wise, it’s only slightly lower (at least in Taiwan) than the Armanis so, I would much prefer to save my money for the latter which is for me superior in quality and pigmentation. The currently-being-released Dior palette reformulations is a huge 11 palette launch, and I’m terribly overwhelmed and slightly not as excited about, because fatigued.

However, Cle de Peau to me is like dessert. I have multiple separate stomachs for more dessert. I am a cow for it, and I moo with enthusiasm. This curveball totally came out of no where. I received the flyer below in the mail about CdP’s newest launch only yesterday morning, didn’t even have time to really look at it and had assumed it was for their fall 2014 Celestial Radiance collection. Instead, when by happenstance I walked by a CdP counter during lunch break, I was met with a whole lineup of 8 newly reformulated eyeshadow quads, 2 reformulated mascaras and 3 new lipstick colours. 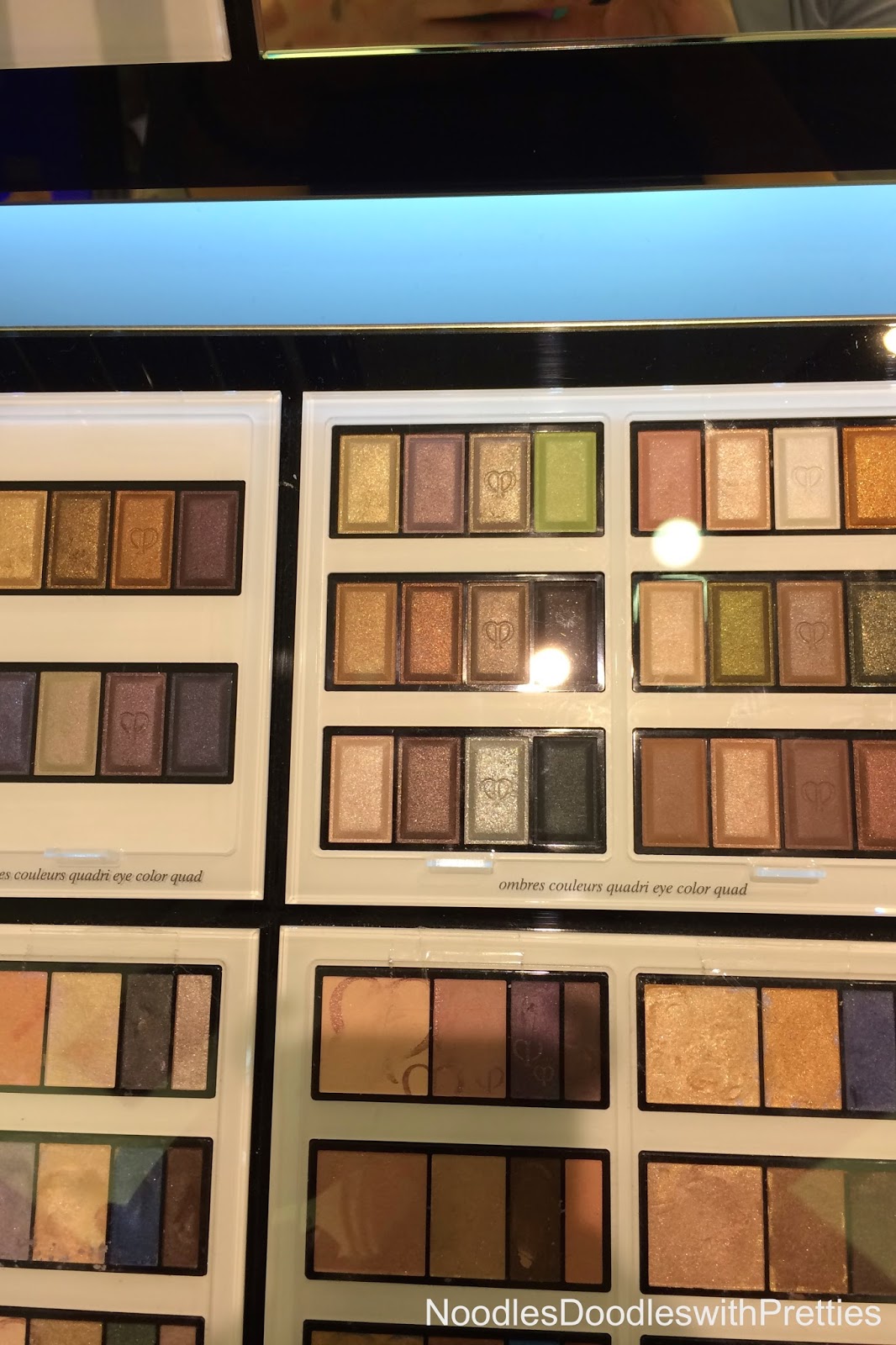 The very second my finger touched the tester, I knew I NEED! It was so buttery soft and silky to the touch. Swatching it, every colour was at least duochrome complex, and wonderfully velvety smooth pigmentation. They are definitely more buttery and shimmer-themed than a lot of the older CdP palettes, which tended to be more matte or sparkles than shimmer, that’s not to say there is a lack of gorgeously sparkly colours in the new lineup.

I was able discern 3 major textures; Radiance that has visible (but still micro fine) glitter, Shimmer, and Matte. By matte, it’s really not actually a powdery matte, there is still a soft, almost hidden shimmer to it, and as far as I could remember all had duochrome qualities. I ended up making a seriously messy swatch of everything including the lipsticks, so I don’t have any swatch pictures. I know I’ll be revisiting the counter again for these, so I’ll attempt a better swatch then.

Not surprisingly, I went into Pokemon mode and chanted in my mind ‘Gotta collect them all!’ Alas, I did the grown-up thing and walked away with merely three (I feel the weight of judgement…). 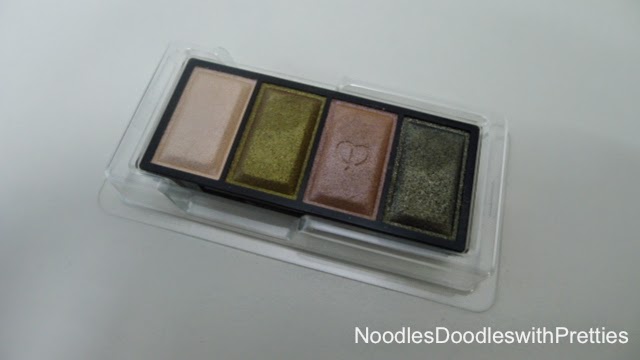 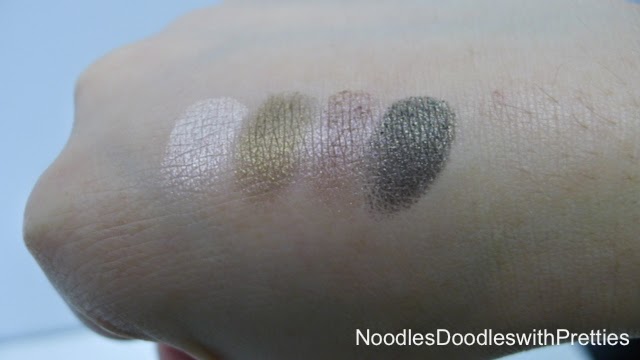 302 (Stardust) is a green themed quad with one radiance shade, and 3 shimmer shades.
L-R: A shimmery pale apricot nude that leans pink in certain angles, a shimmery olive green with gold tones, a shimmery mauve nude, and a radiance forest green with gold undertones and silver micro glitter (it's complexity didn't show up in this particular pic) 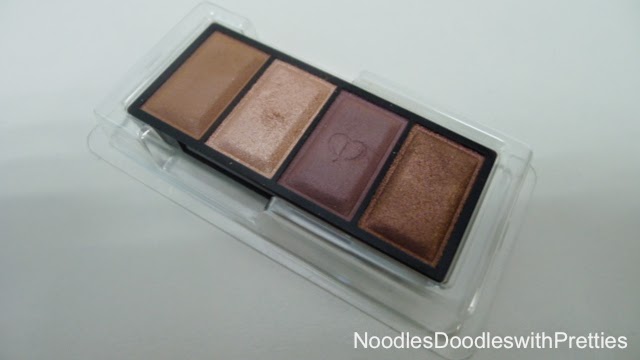 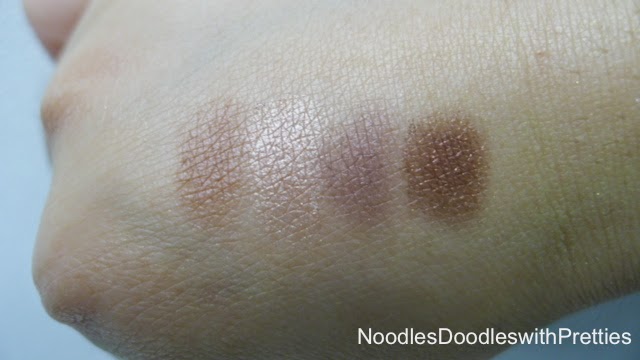 303 (Baby Universe) is a earthy pink nude themed quad with 2 mattes, and 2 shimmers.
L-R: A matte tan with a subtle purple undertone, a shimmery pink nude, a matte purple mauve with subtle gold tones, and a shimmery deep copper that leans purple. The beauty of this quad was quite hard to capture in the swatch pictures, but I can tell it will be one I reach for often. 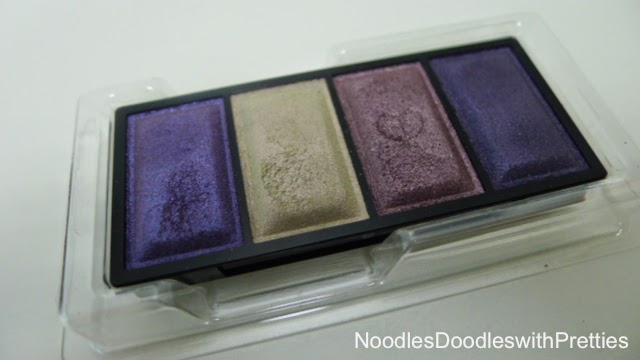 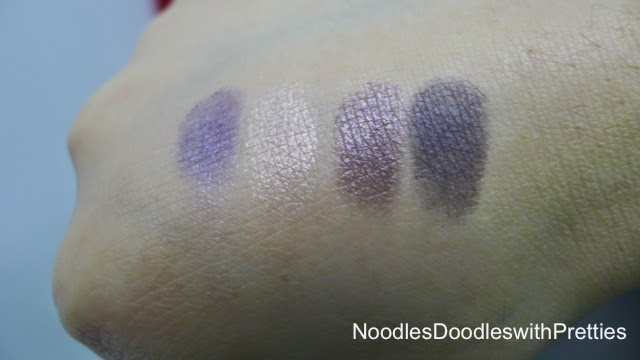 308 (Cosmic Aura) is a purple themed quad with 3 shimmers and 1 matte shade.
L-R: A brighter purple with blue shimmer, a silvery lilac shimmer with pink iridescence, a more plummy purple shimmer with rose gold tones, and a navy matte with grey tones.

Even though the new quads can fit into their old palette cases, there is a new one that came out in the launch. I like to do without packaging as much as possible so I have only picked up the refills.


Some quickie first try looks with two of my three palettes. I don’t really wear strong eye looks for work, so I’ve basically used my Smashbox #7 (that has a tendency to dilute pigmentation) brush to lightly apply and blend. I’ll follow up with a more detail comparison after I’ve recovered from my multiple orgasms at the counter. 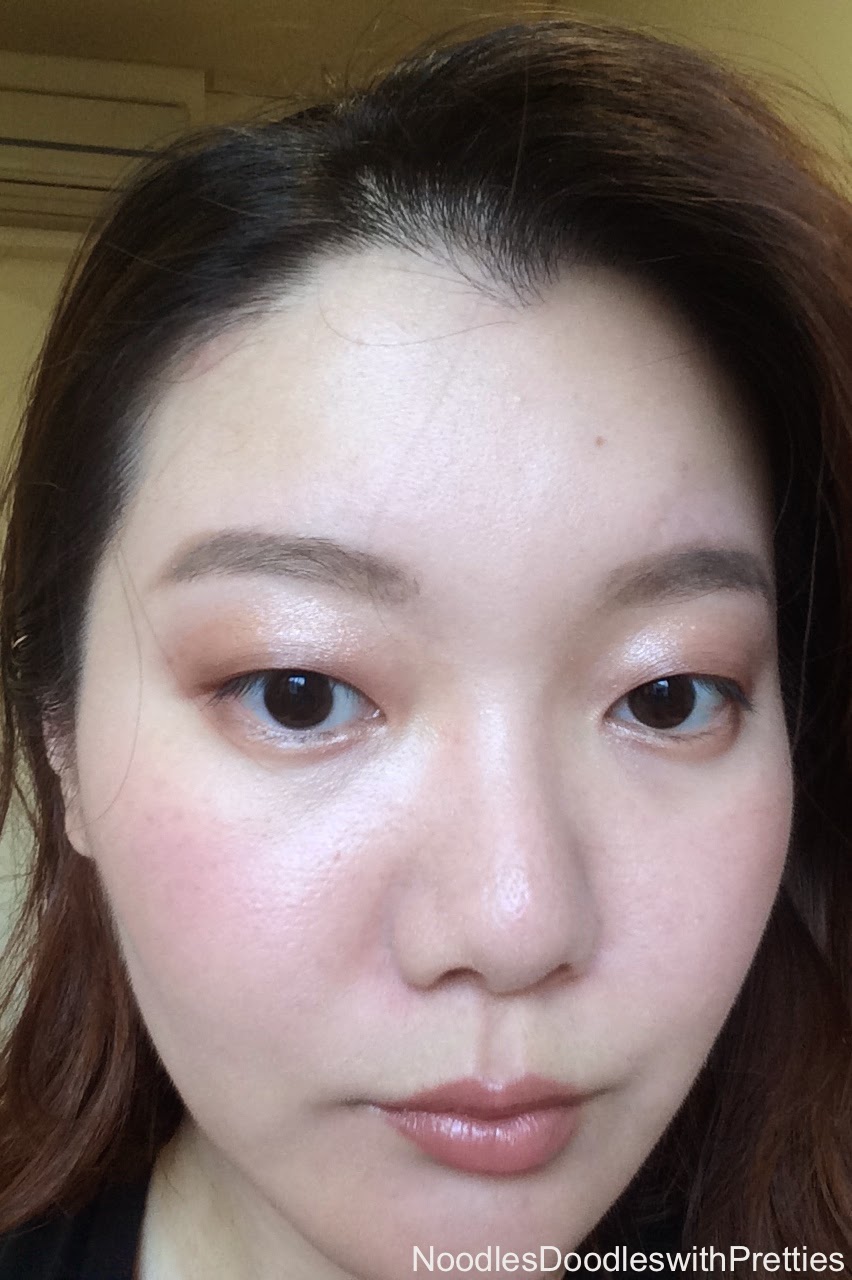 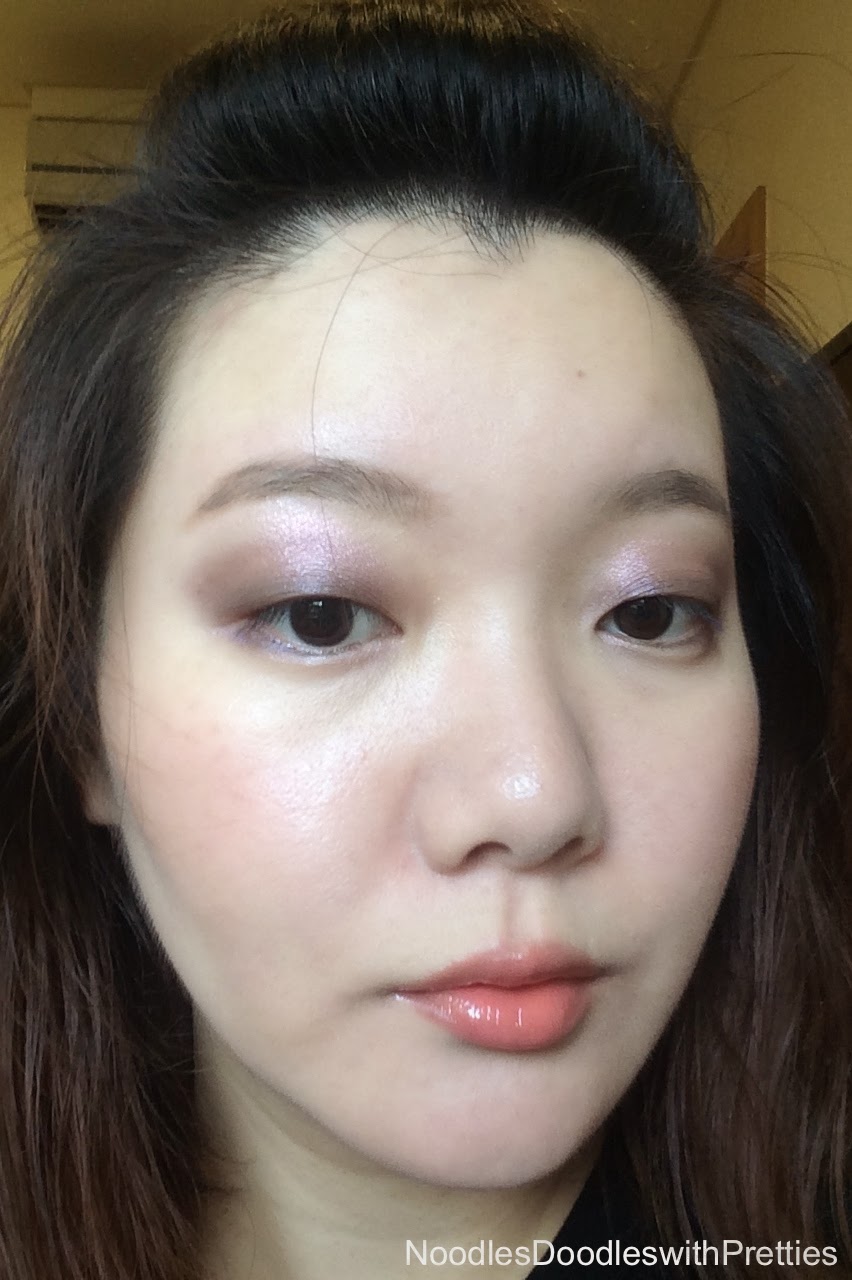 For now, all I can say is…LOVE!

What recent eyeshadow releases have been breaking your resolve?

Oh thanks for the temptation, Noodles LOL Kinda glad I actually have no access to the brand here (but I might be back in Taiwan in autumn...). I never paid much attention to CdP eyeshadows because I thought they're just too light and bland for my taste, but I'm absolutely loving the three quads you picked out! The purplish one is ESPECIALLY stunning! I am really looking forward to Dior's new ones. I'm already eyeing one or two of those!

I def think CdP has been quietly reinventing itself in the makeup department, especially since it signed on Amanda Seyfried, bringing out (for them) bolder and younger colours. However, I think a good majority of it's clientele are more reserved in their tastes, so they stick with striking a balance. The only Dior palette I'm really wanting to see asap is the one used in the campaign, which I think is Trafalgar. The model looks amaze!

I know they make great lippie formulas, but the shade selection doesn't really speak to me. The eyeshadows were too sheer for me, so it's nice to see that they revamped it!

Yes I think that one is Trafalgar! I have problems imagining myself using that one, but it is unique to say the least!

Their lip shades are lacking on the corals and purples, leaning more towards pinks, nudes and reds, so hopefully they'll one day curve ball us with some new shades.

Which of the Diors are you looking to try first?

Ahhhhhhh! This is amazing because now I know someone else has a separate makeup stomach for specific brands. :) Mine is usually reserved for SUQQU.
You are really wearing these shades well, Noodlies! I've edited my post to reflect your CdP posts.

Thanks so much Belly!
If I had easy access to Suqqu.... I may spontaneously combust due to too much ethanol output from overworking my multiple stomachs ;)